soccer field: powered by players footsteps, or not?

You may have read recently about Shell’s renewable energy project in Brazil. It’s a soccer field lined with peizo-electric tiles that capture energy from footsteps. While the project was reported excitely (in FastCo.exist, BBC, Gizmag and others), just recently Alex Epstein, in an article for Forbes, has “done the math” to show that the footfall-power is not enough to keep the lights on, a fact that Shell doesn’t mention. 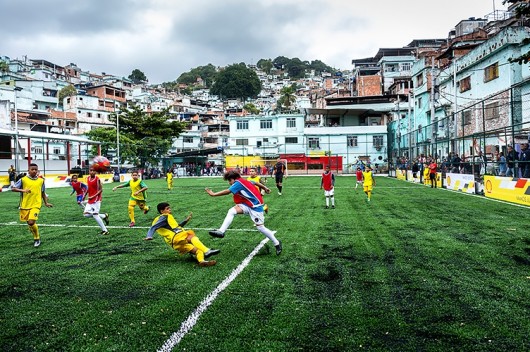 Epstein argues that footfall-power is ridiculously expensive and this project practically gives renewable energy a bad name by being so misleading about the potential. To an extent I agree. It’s important for designers to have a sense of the real potential of different forms of renewable energy. If you need to power a hair-dryer, you can’t use foot-fall power very practically. But, footfall power does have some potential and could charge batteries in heavily trafficked transit stations, for example.

In addition, an important aspect of the story that Epstein doesn’t address is the social. Shell’s Make the Future program is aimed at inspiring future scientists and engineers, and kids associated with this soccer field were involved in installing and monitoring the energy aspects of the field, in a “live” science experiment. So Shell is willing to donate this field to the community and kids are inspired by the idea that energy can be captured in more ways than they realized. Education and inspiration may ultimately be a valuable social impact that arises from this technical project.

What’s your view on the value of this project?