Can 3D Printing be Sustainable?

Despite all the wonderous news about 3D printing — artificial body parts, food, toys, buildings! — there is an environmental underside to it that isn’t as widely publicized. One recent article (in 3DPrint.com) points out heavy metal (antimony) content in 3D print filament.

Another article (in TechRepublic) gives us “10 things to watch” including energy use, air emissions (airborne particles emitted during the printing processs), plastics, and ethics (weapons, bio-prints).

Two recent initiatives are trying to address some of these concerns. The Ekocycle Cube 3D printer is designed to print with a filament made partially from post-consumer PLA from plastic bottles. 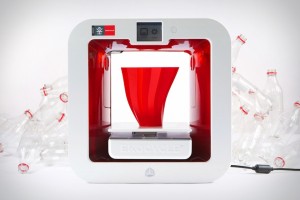 Going further is an organization called the Ethical Filament Foundation which “aims to brand an ethical filament production standard and develop a certification process,” for 3D print filament, according to this article (via Big Think). “Ethical” means on a fair-trade basis and from recycled waste.

Protoprint, an Indian social enterprise is already aiming at this goal. The organization provides waste pickers in urban India with the technical means to produce prime filament fillers for 3D printers. Very cool! 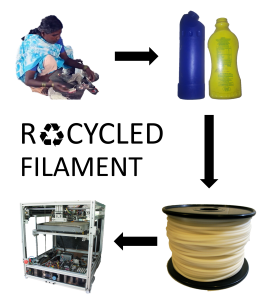 A longer term environmental debate about 3D printing pits the benefits of “additive” manufacture, where in theory no unwanted material is used (no “end cuts”) compared to traditional manufacturing. Clearly 3D printing as an industry is in its infancy and there’s no way to compare traditional maufacturing to a similarly established 3D Print industry. What we can do now is learn from previous mistakes and think carefully about how we move 3D printing forward ecologically, socially, and financially.